THE TRUTH BEHIND THE LIES
As of 23 March 2022 this twitter page no longer exists, one can only speculate why because 18 months ago she made her tweets private after being caught out telling lies and writing absolute garbage about her family (see below).

The following twitter feed was provided by one of Pam's relatives on 22 July 2020. Once it has been deciphered to make sense (regardless of the typos) it will be dealt with, pointing out her silliness and lies. Suffice to say at this point this is typical Pam, when she gets caught out she resorts to bullying, abuse and lies and attempts to intimidate and  denigrate people.

​Pam has given this website www.tjanaragorenggoreng.com publicity through her twitter feed and it might come as a surprise to Pam that it doesn't need her authorization as she says on twitter. The website was set up because decent people were appalled by the lies in Pam's fictitious memoir about her family and life in Longreach and Rockhampton.

She will be disappointed to know that the website www.tjanaragorenggoreng.com is going to be here for a long time, it merely exposes the lies, fiction, make believe and fantasy about her life in Longreach and Rockhampton in the stupid "memoir" A Long Way from No Go" of the person who calls  herself a silly, offensive made up Aboriginal name Tjanara Goreng Goreng.

Her attempts to intimidate and denigrate Kevin Williams and lie about him says a lot about her as a person.

Pam says "we have engaged a great defamation lawyer in a large Melbourne law firm to go him for defamation" (sounds very Donald Trump like!) Kevin said he won't be hearing from the "great defamation lawyer" because he can't be sued for telling the truth about Pam and the lies in her silly  book "A Long Way from No Go" and he said, just for the record, he has never called himself a high powered lawyer as she has alleged (don't know where Pam pulled that one from) but he is known as a prominent Indigenous lawyer which stems from the fact that he was one of the first few Aboriginal law graduates in the country last century and is recognised for his achievements in the law, both domestically and internationally, as well as his work in the Aboriginal community.  He will continue to call Pam out for her lies about the Williams family in her silly "memoir".

There is ample evidence that Pam Williams aka the silly made up name Tjanara Goreng Goreng is a pathological liar, thief, narcissist and that she exhibits all the traits of a psychopath.

One could say Kevin knows a lot more about the law than Pam ever will despite her twitter attempt to denigrate what he has achieved in the law.

He finds it amusing that Pam said  "what is being played out here is the history of a highly emotional dysfunctional Blak@man who has not addressed his own@history and all my life has treated me violently e.g. calling me a slut, a whore and a cunt." Just substitute woman for man in Blak@man, his for her, and you have Pam to a tee. He has no intention to stooping to her gutter mouth level, the whore, cunt and slut name calling never happened, she's projecting. Kevin will continue calling Pam out as the liar and thief that she is.

​Read the details section Pam didn't even know she was Wakka Wakka whereas Kevin carries the history and knowledge of his people handed down to him from those who went before him. Pam wasn't privy to Wakka Wakka custom and law, she's obviously got a problem when one reads her twitter rant which sounds highly emotional and dysfunctional.

Kevin hasn't spoken to Pam since the mid 1980's but he has kept written documents on Mad Pam's lies and theft from her parents over the decades (see details section).

​Kevin said the website won't be taken down because all it is doing is telling the truth about Pam since she wrote her silly book. The website deals with her lies in the book about the Williams family and her life in Longreach and Rockhampton.
​
People will continue to provide information about Pam for the website including Kevin Williams (the so called stalker) who has no interest in Pam save for the lies she has told about the Williams family.

​Pam forfeited the right to be part of the Williams family after her ignorant, offensive  book was published so she's not recognised as Kevin's sister, she's just a liar and a thief.

Kevin's partner said after she read the twitter feeds that Pam obviously has serious mental health problems, is emotionally violent, a liar and generally an awful person.

​In due course information about Pam's violence will be posted on this website.

​Kevin recently went back to Rockhampton to see his mother and caught up with a friend from the early 70's. His friend said to him "your parents must be proud of what you have achieved". Kevin's response was "no, I'm proud of my parents for what they achieved, they gave us kids a life that they could only have dreamed about, it was their sacrifices that gave me the opportunity to achieve what I have and for that I am eternally grateful."

​People are encouraged to read what is on the website. Reasonable, rational, sensible people can form their own opinion about Pam's lies.
​
​Updates will be provided from time to time.

Read the following six tweets, we are assuming Pam is having a melt down because it's just crazy, she can't even string a sentence together properly as she attempts to denigrate Kevin Williams.

Update 1 October 2020: Whatever happened to the "great Defamation lawyer in a large prominent Melbourne law firm to now legally  go him for @defamation" that she's talking about in her 19 July 2020 tweet? It's just delusional fiction and fantasy. No lawyer would touch Pam after they realized what they were dealing with.

As Kevin said he can't be sued for telling the truth about Pam. He reiterates she's a liar and a thief, is a narcissist and exhibits the traits of a psychopath as well as suffering from serious mental health problems.

As at the 12 October 2020 Pam has changed her twitter page to say her tweets are protected and only approved followers can see her tweets. Too late for Pam, she's locked the gate but the horse has already bolted

​Unfortunately for Pam there is a vast amount of her lies and madness on social media which will be uploaded to this website in due course.

As at 27 November 2020 Pam has made her tweets public again and has written on her twitter heading "authenticity cannot be made up." which is hilarious given the number of lies that Pam has been exposed for in her silly book and other rubbish on social media.

Update February 2021 Mad Pam has removed the following tweets from her twitter account, maybe in a not often lucid moment she realises she's just sprouting more lies, silliness and fantasy. Kevin looks forward to her taking him to court (which isn't going to happen) but if it was ever to happen she would be exposed for the liar, fraud and thief that she is and the following mad, defamatory tweets can be used as evidence against her but as we know Pam won't be taking defamation proceedings against anyone because people are merely telling the truth about about her. 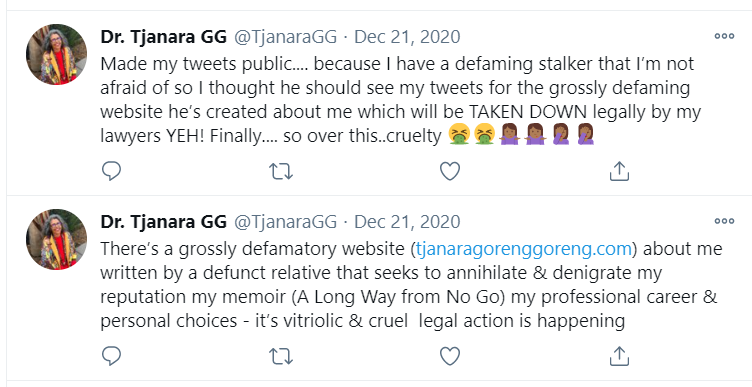 Despite what Pam (the fictitious, stupidly made up named Tjanara Goreng Goreng) has said www.tjanaragorenggoreng.com is not a "grossly defaming website" it merely exposes the lies that Pam is well known for in the Indigenous community Pam is delusional and is ranting when she says the website will be TAKEN DOWN legally by her lawyers. Pam hasn't got "lawyers" and no self respecting lawyer would represent her when they realized that they were dealing with a person who is a pathological liar and lives in a world of make believe, madness, fiction and fantasy. No one is "denigrating" Pam they are just showing how delusional she is and they look forward to "legal action ... happening" If Pam is cross examined in a court of law she will be shown to be a habitual liar, thief, fraud, delusional, seriously unstable and living in a world of make believe. No one is "denigrating or annihilating her reputation". Blackfellas know she's a liar, thief, fraud and suffers from serious mental health issues which explain her delusional fantasies, make believe and lies. As of 28 May 2021 Pam has made her tweets private again so people can no longer see how silly and offensive some of her tweets are (which is a good thing)